A key trigger for the increased retail participation in equities has been the lockdown triggered by Covid-19 that saw investors channelising their savings to capital markets in search of better return on their investments and the need to increase their disposable income. 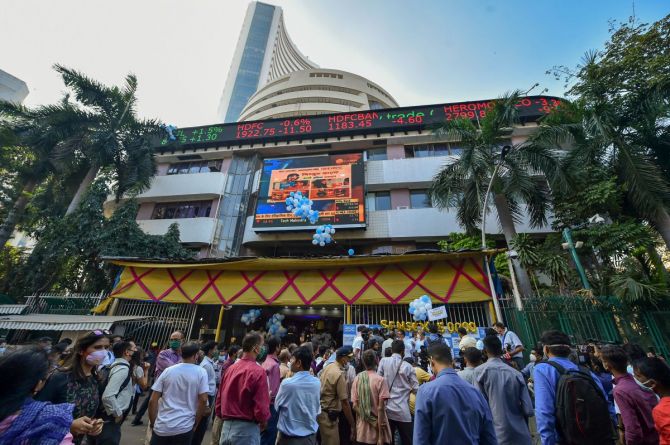 IMAGE: Celebrations at BSE after the sensex crossed the 50,000-mark for the first time, in Mumbai, January 21, 2021. Photograph: Mitesh Bhuvad / PTI Photo.

Foreign investor flows — considered to be the movers and shakers of equity markets — have taken a backseat over the past couple of years with retail investors now being in the driver’s seat, suggests a recent report from foreign brokerage firm UBS.

The report is based on a survey done in November 2020 that was focused on urban consumers with an average income of Rs 95,000 per month.

“Overall, when we combine household equity savings through mutual funds and direct share purchase, we see that households are a material force to be reckoned with: overall 25 per cent higher than foreign portfolio investment (FPI) net inflows over the last two years,” wrote Sunil Tirumalai, executive director and India Strategist at UBS in a January 20 co-authored note with Dipojjal Saha and Akshay Gattani.

A key trigger for the increased retail participation in equities has been the lockdown triggered by Covid-19 that saw investors channelising their savings to capital markets in search of better return on their investments and the need to increase their disposable income.

The share of client participation in capital markets at the NSE for individuals rose to 46 per cent in fiscal 2020-21 (FY21) on YTD basis, as compared to 39 per cent in FY20, UBS said.

The overall rise in the financial wealth of Indian households in 9M-CY20, according to UBS, stood at Rs 22 trillion ($300 billion) — up 9 per cent compared to the five-year trend.

While UBS suggests it is impossible to say with a high level of confidence what actions, or lack it, taken by the households led to this $200 billion in extra savings, a report by State Bank of India’s economic wing (SBI Ecowrap) suggests spending habits of consumers significantly changed during pandemic within essential / non-discretionary and non-essential /discretionary items.

However, the share of savings that flowed into market-linked instruments at 5 per cent during this period was far less than flows into currency (17 per cent), insurance, pension and provident fund (31 per cent), UBS’s findings suggest.

Over time, UBS says investors too have matured with a majority of respondents suggesting they would take advice before redeeming their funds if returns were to turn negative.

“Love of Indian households for safer assets becomes even starker. Over the last 20 years, household preference for deposits, cash and other safer assets has meant these have remained around 60 per cent of total financial wealth of households — in spite of delivering lower returns than alternatives like equities and mutual funds (grouped under market-linked instruments,” the report says.

Renault Kiger is a hatchback killer

iQOO 3 available at an unbelievable discount, priced at Rs 24,990

IKEA to increase sourcing of toys from India

Why Typewise thinks it has the safest smartphone keyboard